Start a Wiki
“This is madness!”
―Clausewitz, not Sparta.

Prof. Dr. Ernst-Günther Schenck [IPA: ɛɐnst gyːntɐʃnɛk] (3 October 1904 – 21 December 1998) was a German Standartenführer (Colonel) and doctor who joined the SS in 1933. Because of a chance encounter with Adolf Hitler during the closing days of World War II, his memoirs proved historically valuable, and they were included in the 2004 film Downfall.

Schenck was born in Marburg. He trained as a doctor and joined the SS. During the war, Schenck was actively involved in the creation of a large herbal plantation in Dachau concentration camp, which contained over 200,000 medicinal plants, from which, among other things, vitamin supplements for the Waffen-SS were manufactured.

In 1940 he was appointed as inspector of nutrition for the SS. In 1943 Schenck developed a protein sausage, which was meant for the SS front line troops. Prior to adoption, it was tested on 370 prisoners in Mauthausen-Gusen concentration camp, some of whom died of hunger edema. In his own memoirs, Schenck stated that his only concern was just to improve nutrition and fight hunger. However, a report in 1963 condemned Schenck for "treating humans like objects, guinea pigs". In the Federal Republic of Germany, Schenck was not allowed to continue his medical career.

In April 1945, towards the end of the war, Schenck volunteered to work in an emergency casualty station located in the large cellar of the Reich Chancellery, near the Vorbunker and Führerbunker. Although he was not trained as a surgeon and lacked the experience, as well as the supplies and instruments necessary to operate on battle victims, he nonetheless assisted approximately 100 major surgeries. During these surgeries, Schenck was aided by Dr. Werner Haase, who also served as one of Hitler's private physicians. Although Haase had much more surgical experience than Schenck, he was weakened by tuberculosis, and often had to lie down while trying in vain to give verbal advice to Schenck.

During the end time in Berlin, Schenck saw Hitler in person twice, for only a brief time: once when Hitler wanted to thank him for his emergency medical services, and once during the "reception" after Hitler's marriage to Eva Braun. Schenck was captured by the Soviet Army during the Berlin "break-out" of 1 May 1945. He was released from Russian captivity in 1953 and returned home to West Germany.

Prior to writing his memoirs, Schenck was interviewed in depth by James P. O'Donnell for his book, The Bunker, who recorded his memories of Hitler's last days. Schenck died on 21 December 1998 in Aachen.

Schenck was first introduced in the Schenck and the burning of documents scene, just after Clausewitz took effect. He obtained permission from Tellermann to stay in Berlin; as a physician he serves the Wehrmacht which was still firmly defending Berlin as the Schutzstaffel pulled out and headed north.

Night falls, and as he and his adjutant were delivering the supplies loaded on a truck, they were stopped by fleeing Volkssturm members - two elderly men being pursued by a Greifkommando squad tasked to shoot deserters - and later involved in a Mexican standoff with the squad leader.

Arriving in the Chancellery's bunker, he witnessed the commotion of the place, which is full of injured soldiers and needy civilians. He met Werner Haase there and helped with emergency operations involving mainly amputations.

On 30 April, Schenck, along with Haase and nurse Erna Flegel, were summoned to the Führerbunker to see Hitler. As Haase tested the cyanide pills on Blondi, Schenck consoled Erna, who burst into tears after meeting Hitler and joined a drinking party round a table.

After the death of the Hitlers and the Goebbels, Schenck bid farewell to Haase, who stayed behind, and joined Mohnke's breakthrough group. Once in a safe house, Schenck tried to talk Hewel - who stumbled into the group on their way - and Stehr out of suicide, but ultimately failed.

Despite being one of the main characters of the original Downfall movie, Schenck actually appears in the parodies very rarely. This makes Schenck unfortunately one of the most unappreciated Downfall characters by the Untergangers as few people use him for parody making - probably because of his good nature. Bald as Jodl, but having more charisma and supposedly being more handsome than him, Schenck doesn't like to waste time on bothering Hitler like Jodl. He does only what he is good at, like: lecturing officers for burning papers instead of recycling them (10:50; all the moments are from "Extended" Downfall version), messing around in the Nazis' headquarters, watching Franz Schädle eat a Walther PPK without flinching, and showing his good example to the other evil Nazis (he'd probably be on the Good Nazis' List).

In a few parodies, he is an addict and he's risking his own life to get some drugs from the hospital being captured by Soviets (35:10). He claims that he's just a doctor, to be exact an "internist", but he's also called "Herr Professor" too (11:25). Therefore his education remains a mystery. He meets Der Führer right before his suicide, but his leader prefers to say goodbye to the dark-haired nurse. (1:53:30) .

He appeared in Gachaganger's parodies thrice, taking on a role as a doctor. In Hitler's Bizarre Gacha Adventure, he treated Gachaganger after being hit by Hitler. In Fugulein Visits the Fuhrerbunker, he's the doctor who diagnosed Saika Totsuka for tetrodotoxin poisoning and later, Fegeltoxin poisoning. In The Wonder Child, he first appeared in the parody standing beside Göring looking at the sky when Astro Boy sacrificed himself to stop Fegelein. Later, he and Gachaganger ran to the place where Astro was found. Hitler asked if he could fix Astro. Schenck analyzes Astro and said that the problem is the power source and there's no way of replacing it. It may be implied that Schenck's medical expertise expands not only to humans, even to robots.

His Mirror Parody Universe is Kcnehcs Rehtnüg-Tsnre, who unlike his Downfall counterpart is not a good Nazi, quite the contrary, he's among the most evil persons in the film. He is also Rellüm Xam's adjutant.

Schenck near a Tiger I tank, which seems to be aiming at him.

With Erna and Haase, going to say goodbye to Hitler.

Schenck with his adjutant Müller.

Schenck receives a call from Mohnke.

Schenck as an old guy. 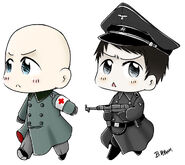 Fanart of Prof. Schenck and adjutant Müller.
Add a photo to this gallery

Retrieved from "https://hitlerparody.fandom.com/wiki/Ernst-G%C3%BCnther_Schenck?oldid=84793"
Community content is available under CC-BY-SA unless otherwise noted.