ernestjohn18 is an Unterganger from the Philippines. He currently has 46 subscribers and 102 videos.

He started out on making Downfall parodies after watching a Hitler rant video about Command & Conquer: Tiberian Twilight; he became overjoyed when he watched the parody videos so he decided to strike out on his own. Became friends first with the Unterganger shomronon. After making Der Fuhrer Flash Report Program ( Part 1 ), shomronon promoted him.

Ernest makes use of Windows Live Movie Maker for making parodies. Most of them were in the traditional, subtitle-only style, although he does make use of spliced clips from time to time.

On May 17, 2012, Ernest announced he is retiring after uploading his 100th video. Reasons for that is he has other things that needs to be done but he said that he will return in the future. He also said that he will upload a feature length parody after his come back.

THE NEW BURGDORF ( Coming Soon after came out from retirement )

The parody is about Burgdorf quits as a general then moves on to pursue his new job as an artist. Hitler's generals are taking a break then Burgdorf sings that he loves vodka so much. Then after he sings, Keitel tells the them that they should go to a meeting today cause Hitler is gonna rant about something. Weidling tells to him that he has something important to do. As the start of the meeting, Hitler rants and goes into furios rage cause he found out that Burgdorf throws a beer party last night. Shortly after the meeting, Burgdorf can't take it anymore for Hitler's ranting stuff so he decided to go to Reich Musical Records that Weidling tells him. At Reich Musical Records, he ask to them that he will do it really good. After the song was finished, the two say that the song is not enough but Burgdorf tells them that the song is good. Then Burgdorf now starts to rant that the song is perfect enough, then Jerome starts to go in rage that if Burgdorf did'nt make a new one then he will be fired. Burgdorf quits instead. Shortly after he quits, he then goes to Jerome's house to apologize for what he did and ask if he can do the sing stuff again. Jerome ask him if he will make a new song like a love song, Burgdorf accepted it. Then the next day, they begun to record another song from Burgdorf but this time, it's a love song. They agree with the song and ask him for a new name. Burgdorf ask to be called Bruce Berger instead. Then after that part, Hitler is informed that Burgdorf quits, he was shocked that Burgdorf leaves without telling him. After a few minutes, Hitler ask Burgdorf that why he quits, Burgdorf replies that he can't take Hitler's rant anymore and find a new job that is better. Then after Hitler calls Burgdorf's boss ( Ernestjohn18 ), he wishes a good luck to Burgdorf for his new job. Krebs ask Hitler if they could make a farewell party for him but he denies it. Then the last scene is where Bruce throws a party to celebrate his new job as an artist. 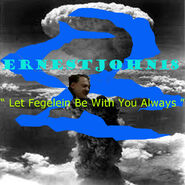 Ernestjohn18's 1st favorite character
Add a photo to this gallery
Retrieved from "https://hitlerparody.fandom.com/wiki/Ernestjohn18?oldid=19219"
Community content is available under CC-BY-SA unless otherwise noted.