Unterganger of the Month
February 2011

Echoes1224 is an American Unterganger. He specializes in special FX and audio-based parodies made mainly using Sony Vegas HD 9. He is best known for his Hitler Is Trapped series and Fegelland.

Echoes started making Hitler rants videos on YouTube after watching parodies from some of the first well known Untergangers (HRP, KBZ, Bossimias, Vzorkic, etc). And from June to July 2010, he created some of his first few parodies with Windows Movie Maker. After uploading his first parodies with Sony Vegas, Echoes started getting noticed by other parody makers and was later promoted by Vzorkic in September 2010. The promotion brought his subscriber count from about 40 to 100.

On November 10, 2010, Echoes uploaded "Hitler Is Trapped In An Elevator", which has become his most viewed and liked video on YouTube. Two more "Hitler is Trapped " parodies were made in the following year along with "Music Video Reviews with Adolf Hitler", another audio-based parody series.

On August 2011, Echoes created the Fegelland YouTube channel, planned to move his videos, and continue Unterganging there. All the previously uploaded parodies were replaced with updated versions which included new special effects, improved subtitles, updated outros, and/or added scenes. Only two of the original uploads (Fuhrer O's and Trapped in an elevator) remained on his main account after the switch.

Within a few months of switching channels, Echoes1224 regreted the move and returned to his first channel. Fegelland now mainly serves as a backup account.

After restoring his channel on November 2011, Echoes went on a half-year hiatus and became a dormant Unterganger. Echoes uploaded his first video of 2012 on June 4 and has new parodies planned.

After many months of being inactive he posted a comment on his channel: "I'm in an indefinite hiatus at the moment. I'll return whenever﻿ I can."

On January 2013 he posted the following message on his channel:

I'm NOT retired, I still have about 20 or so parodies left in me.
I know I've hardly made any parodies since late 2011, this is mostly due to my lack of patience in making the more complex and ambitious parodies in my free time. But I know I still want to make those parodies. I'm still interested in reaching my full potential as a downfall parodist before retiring for good by the end of this year. As for a new parody from me, I can't promise anything right away. Just enjoy works from other Untergangers while I work on getting a new video into your sub box.

On April 9, 2013, Echoes made an important message regarding the future of his channel:

OK, this waiting game since 2011 has gone on long enough. I've made my decision that will determine the future of this channel.

I want to honest with my subscribers and viewers who have wondered when I would come back or make a new "Hitler is trapped".

On May 1st I will either upload a new parody (becoming an active Unterganger again), OR announce my official retirement and quit with a farewell video.

Whatever choice I make by then, I just want everyone who's watched my videos and subscribed to know that it has been a great run, it was fun contributing to this awesome meme, and being a part of the Untergang community.

See you in May.

1 May 2013 came to pass, and while no video is uploaded that day, Echoes updated his channel description to this:

My decision: I've decided to stay, but I'm going to upload the comeback parody a bit later than others anticipated since I was on the brink of retiring today but changed my mind.
My next parody is in the works and shouldn't take me much time to finish. My last two videos were done fairly quickly and this one shouldn't take much longer. So yeah once it's up I can finally say "I'm back!".

On May 4, 2013 he uploaded his comeback parody, but has yet to upload another video. He may be assumed to be retired.

Despite his dormancy, that seems to not have stopped him from entering the Unterganger Hall of Fame in September 2014.

After 5 years of dormancy, it is implied that he has silently retired from making parodies. 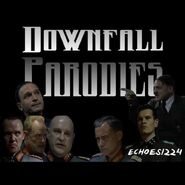 Echoes1224's first avatar.
Add a photo to this gallery

Retrieved from "https://hitlerparody.fandom.com/wiki/Echoes1224?oldid=82004"
Community content is available under CC-BY-SA unless otherwise noted.