Unterganger of the Month
December 2019

Parody of the Year
If Untergangers controlled Youtube Rewind 2019 (2019)

Dominus is a sixth-generation Unterganger from the United States. He currently has over 70 subscribers, 7100 video views, and 25 parodies. His first parody was uploaded on November 7th, 2018.

Dominus makes his parodies in the traditional style, but he often employs a story behind them. His most well known case is a series concerning Hitler and Bob vs Anime School. He has an affection for Traudl Junge and as such, incorporates her into his parodies and parody universe.

In terms of creating the parodies in the first place, Dominus stated that he uses an Ipad. However on April 4th 2019, he began to use his computer again as announced on backtocomputer.mp3

The Rich History of Dominus

Dominus' history begins with the first unforseen parody he made called Goebbels and The Dead Angry Grandpa made in 2017, The first ever made Parody in the history of his life before he was even considered an unterganger! Now before all of that, He had a youtube channel but sadly it was terminated by youtube. But during his time Unterganging, He started off small with family type videos about himself and his family but after he got another youtube channel he took off with the pursuit of Unterganging.

His first ever parody on December 16th 2017 called "Goebbels and the Dead Angry Grandpa" which talked about the late Charles Marvin Green Jr better known as The Angry Grandpa passing away at 67 years old. It also footaged real footage of a burial but not the burial of Angry Grandpa signyfing the lowering of the AGPs casket but it ends with an unexpected church explosion which is rather disturbing but this was dominus back in the day.

The Never Before Seen Series

The Never Before Seen Series known as Downfall 2 is a war series where Dominus made the Bunkerians attack against anything cringy which ended up in the archives since there wasn't any sort of place to broadcast it. It was created on February 11th 2018 with the first episode being Fegelein assassinating a character from Overwatch and soon it took flight from there. However it was rebranded as Wars Against Weebs because of Dominus being more focused on a war on weeabooism. However it was archived once again due to no broadcasting services.

The personal parodies started out on April 2st talking about Dominus' nieces and nephews breaking an entry in his room while he was RPing with someone, It also simulated how it went during the time of the raid. Some other parodies include Dominus' school and his classmates as some parodies of Dominus' family and friends which are all archived for the time being.

Dominus entered the Unterganger Chat Central on November 28th 2019. He soon met Dark Slash X (Formerly known as VileHQ today), Drateraton (Also known as Drate), and Beom jun koo. During his time as an Unterganger, He also had affiliates with the HRP server not knowing about the drama that went on between the UCC and HRP soon following into the drama that would be seen on May 31, 2020.

On November 11th 2019, Dominus reached the 100 subscriber milestone that made him roll with the big dogs. He never made a 100 subscriber special but he celebrated it in the UCC with his former friends known as Drate, VileHQ and Beom. Not much else is known about 100 Subscriber achievement but he earned bragging rights which would get him more than 100 subscribers in the future.

Another form of parodies Dominus does is known as Bob Rants Parodies made from a Russian WW2 Comedy made in 2008 called "Hitler Goes Kaput" or in Russian as "Гитлер Капут" starring the Russian Actor who played the lead role of the film known as Pavel Derevyanko which sets on the land of Arstotzka. The first Bob Rants Parody is known as "Bob's Middle Finger of Doom" which was made on February 22nd 2019 which showcased the character Pavel Derevyanko plays known as "Olaf Shurenburg" which in the Bob Rants Parody universe is known as "Bob Lourembourg Deustchland Vaterland SchnitzelNazi" Flipping off various things which cause mass destruction while in the beginning, Another Character wearing a Swastika Eyepatch otherwise known as "Jerry F. Wagner" orders him not to use his middle finger of doom but Bob does so anyway. It soon sky rockets with other episodes involving a female character played by Anna Semenovich known as Zina but known in the Bob Universe known as "Sicila Veretznov", Another female character played by Evelina Bledans called "Frau Oddo" but known in the Bob Universe as "Erika Gerda Anna Rhineland Schnitzelnazi" and many more!

DJ Dominus is Dominus' SoundCloud account that features the many beats Dominus has made from Mid 2019 to Late 2019 and so on. Currently there are 44 Tracks and 7 playlists in counting to be fairly accurate. the Playlists include the ongoing series known as Deustches Remix coming in 4 volumes, Grease and Rockabilly years coming in 2 volumes and When Worlds Collide in only one Volume. He hasn't made any progress on it but he'll make some more beats in the future

Reichsmark TV is the secondary Youtube account of Dominus featuring custom made films made from real old films and footage fromn the 1910s all the way to the 1950s. It is famous for making "Toilet is Dead" and making Toiletgangin possible by making "Clorox Bleach advertisement and Anti Toilet PSA" During his time. It's dormant at the moment but if Dominus' youtube account is terminated then it'll be the new main channel.

The Gallery of Dominus' work 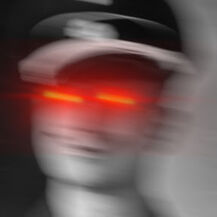 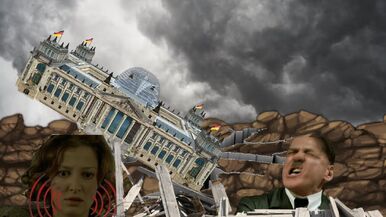 This is the Thumbnail that makes the blazing trail of Dominus 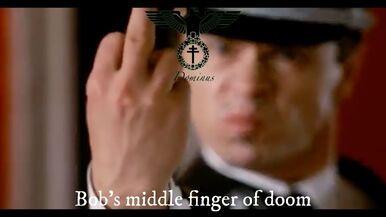 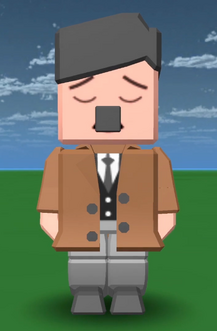 This is footage a photo of Dominus' SoundCloud account 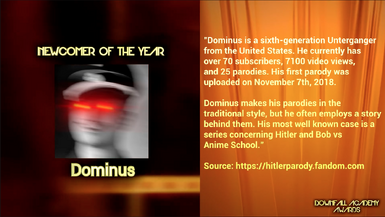 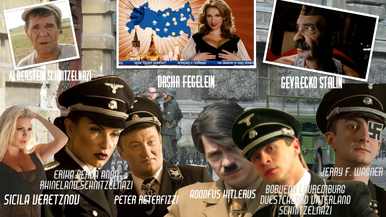 Retrieved from "https://hitlerparody.fandom.com/wiki/Dominus?oldid=86266"
Community content is available under CC-BY-SA unless otherwise noted.