Unterganger of the Month
January 2013

DictatorAntics (also known as DA) is a Dutch Unterganger who created parodies including Downfall Parodies, a series called Gaddafi's papers of doom and on some occasions Stalin Parodies. He is the pioneer of The Sinking of the Laconia parodies and the creator of new antic master, Werner Hartenstein. His style is mainly FX-parodies.

He made his first parody on 6 November 2010 on his previous YouTube channel called 20eurocent. After only 6 parodies he retired near the start of 2011. He one and a half year later wanted to start making YouTube videos again and on 27 June 2012 he decided to rejoin the Downfall Community by creating his present account and he transferred four parodies to the new account. At first he decided to make one parody every single day, but since July the 14th he stopped doing that since it is not manageable and he started preferring quality over quantity.

The first parody that DictatorAntics watched was Hitler gets banned from Xbox Live from MOTURK49 and somewhere in the year 2010 he discovered the channel of Hitler Rants Parodies. He was inspired to also become an Unterganger, and later that year he made his first four parodies on the old channel. He didn't really like his first parodies, because back then he made a lot of spelling mistakes in the videos due to a back then not so good knowledge of the English language and also the bad quality of the videos.

The style of DictatorAntics used to be modified traditional, but now mainly FX-parodies. The first parodies on his channel already included scenes from other movies such as Iron Sky and The Great Dictator. Later, in the third week of August he started making his first FX-parodies. DictatorAntics enjoyed making FX-parodies and practiced a lot to become decent at headpasting and other FX-related stuff. (despite the occasional ranting about Sony Vegas crashing.)

After becoming a member of the Downfall Parodies Forum on 22 August 2012, his amount of subscribers rapidly increased within a few days. Then on August 24 he downloaded TheSilverUniverse's Green Screen Pack 2.0. and with it, DictatorAntics then made his first FX-parody, Hitler in Amsterdam, using a shader pack in Windows Movie Maker 6.0. After some mishap with WMM as he was making his second FX parody, he decided to start using Sony Vegas Pro 11. His first parody made in Vegas Pro, Hitler in Moscow, was uploaded on 25 August. Later that day he made his 50th special video, President Adolf Hitler, a video in which Hitler is the president of the United States. The video was well received and also won the Parody of the Month.

The Antic Menace
A final war between the Masters of Antics and Hitler.

The Antics Strike Back
Sequel to The Antic Menace, in which the Antic Masters plot their revenge. (Unfinished project)

The Pencil of Doom series from Hitler Rants Parodies inspired him to come up with his own superweapon. He very soon found a video of Gaddafi throwing papers at a U.N. speech and that's how he came up with Gaddafi's papers of doom, and on 17 July 2012 he uploaded his first Gaddafi parody. More Gaddafi parodies followed suit.

Parody of the Month

Near the end of March 2013, Master Studios officially announced his hiatus, and an election was started to elect two new, competent judges - a maintainer (the leading judge), and a secondary judge. The election ended on 5 April 2013, and DictatorAntics won the elections by a landslide. WonkyTonkBotty became secondary judge and DictatorAntics also decided to bring back TheSilverUniverse, who was dismissed from his judge duties earlier in January 2013 by Master Studios.

DictatorAntics has mentioned on the chat a few times that he has "lost his parody-making mojo" and that he is to be considered semi-retired; he has also mentioned that his inspiration is fading. His decline in motivation is evident by his significantly decreased rate of content production. He handed over management of the Parody of the Month award to Soalric in July/August. Although he abstained from officially announcing his retirement for now, late January he changed his status on the Wiki to retired. Though he mentioned that a comeback may be possible, it seems highly unlikely.

During the decreased rate of content production, his activity on the forum decreased significantly as well, to a point he stopped visiting the forum at all. Late January he also left the chat and with edits to the wiki from him becoming rare he is considered to have left the community entirely.

DictatorAntics re-entered the community again in 2015, having visited the new chat room on downfallparodies.net a few times. Later, on 30 May 2015, he uploaded a new parody, hinting at a possible return to Unterganging.

On 15 June 2015, he announced a new weekly series where people would seek advice in the comments section, and Hitler and co. would answer their queries. There will be a new video uploaded every Monday in this series. This marked his formal return to Unterganging. However, the series did not continue for long, and he soon retired again, this time with the intention to keep it that way. He is however still somewhat active on the Batcow gaming channel, collaborating together with TheSilverUniverse and JennieParker87.

In early 2016, he started spending a bit of time in the Hitler Rants Parodies Chat Room, as "BaguetteMan". He also uploaded two parodies, one of them was an unfinished project he had lying around and the other was new. 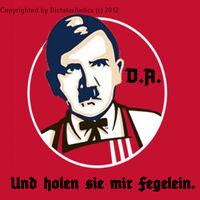 DictatorAntics previous avatar. Was the Hitler Fried Chicken shop based on this?

DictatorAntics' signature on the forum

Fan art made by DA
Add a photo to this gallery
Retrieved from "https://hitlerparody.fandom.com/wiki/DictatorAntics?oldid=78848"
Community content is available under CC-BY-SA unless otherwise noted.