Being the only Indian Hitler
Being the shortest Hitler

His own version of the Downfall cast

All other Hitlers
“Ai vont den eye for an eye!”
―Or "I won't deny for an eye"
“"Barney Barney Barney, I WANT MY BARNEY!”
―Or "NOW PASS THE BROWNIES!"

During a meeting where he participated along with Hitler and Inglourious Basterds Hitler, the Hindi Hitler suggested that Steiner should find Fegelein, but the others disagreed and the meeting immediately turned into an insult brawl and then into a fight.

The scenes where he appears are similar to the ones from Downfall. It's quite possibly that this is what makes him angry, the fact that he's limited to the same scenes as his Downfall counterpart.

"We're short of bullets, so hopefully one should work". 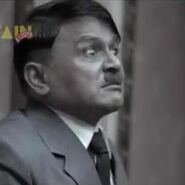 Retrieved from "https://hitlerparody.fandom.com/wiki/Dear_Friend_Hitler_Hitler?oldid=86357"
Community content is available under CC-BY-SA unless otherwise noted.