Dark Lord of the Sith

Being one of the most iconic characters in movie history
Battling Hitler in Epic Rap Battles Of History
“Suck my Robot Balls!”
―Vader before freezing Hitler in carbonite.

In the Epic Rap Battles Of History series by YouTuber nicepeter, Darth Vader has battled Adolf Hitler three times in rapping and won twice (he also put Hitler in a carbonite bath, thrown him in a rancor pit, and sliced him in half).

Shomronon and Hitler Rants Parodies are known to produce several parodies that feature Darth Vader in the Parody Universe, with Hitler frequently becoming Vader himself, such as Hitler Strikes Back and Hitler Darth Vader 'Nooooo!!!'.

In an episode of Hitler Rants Parodies' Hitler Vs, Vader challenges Hitler to a 'Ja vs. Nooo' battle.

In "Hitler wants to find a new successor", Darth Vader tried to be Führer, but Hitler instantly rejected him.

DictatorAntics and Benad361 have also used clips of Darth Vader (often as Anakin Skywalker) in their series The Antic Menace and Rosen Wars, respectively.  Anakin's face is often headpasted over with either Hitler's or Fegelein's face. 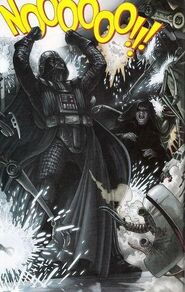 Vader auditioning to be the next Führer.
Add a photo to this gallery
This article is a stub, seriously. Go and press the "Edit" button so you can help expanding it. If you don't do it you will become a victim of a Fegel-antic!
Retrieved from "https://hitlerparody.fandom.com/wiki/Darth_Vader?oldid=76007"
Community content is available under CC-BY-SA unless otherwise noted.