Bruno Ganz (22 March 1941 – 15/16 February 2019[1]) was a Swiss actor, known for his roles as Damiel in Wings of Desire and Adolf Hitler in Downfall (Der Untergang). Bruno Ganz was born in Zürich to a Swiss father (mechanic) and a northern Italian mother. He had decided to pursue an acting career by the time he entered university. He was equally drawn to stage and screen but initially enjoyed greater success in the theater.

In 1960, Ganz landed his first film role, in Der Herr mit der schwarzen Melone (The Gentleman in the Black Derby). Despite the support of lead actor Gustav Knuth, his cinematic debut was not particularly successful and it was only many years later that his career in film got off the ground.

Ganz made his film breakthrough in a major part in the 1976 film Sommergäste, launching a widely recognized film career in both Europe and the U.S. Ganz played a professor opposite Sir Laurence Olivier in the thriller The Boys from Brazil (1978), about Nazi fugitives.

Ganz is probably best known for his role in Wim Wenders' Wings of Desire, as the angel Damiel. He co-starred with Dennis Hopper in Wenders' The American Friend, an adaptation of Patricia Highsmith's novel Ripley's Game.

He went on to portray Adolf Hitler in Der Untergang (The Downfall) (2004). Ganz did four months of research on Hitler in preparation for the role, going so far as to listening to a ten minute recording of Hitler in private conversation with Finnish Field Marshal Carl Gustaf Emil Mannerheim, in order to properly mimic Hitler's conversational voice, and distinct Austrian dialect[1]. In that film's most famous scene, Ganz dismisses all from his briefing room except Dieter Mann, Christian Redl, Rolf Kanies and Justus von Dohnányi.

Ganz recently appeared in The Reader and Der Baader Meinhof Komplex, which were both nominated for the 81st Academy Awards (best picture and best foreign language film).

In July 2018, Ganz cancelled his participation in the Salzburg Festival. German-speaking press reported on his declining health until it was announced that Ganz was diagnosed with colorectal cancer. He passed away in the night of the 15/16 February 2019 at his home in Zürich, according to his manager.

Ganz makes fun of Ulrich in a blooper.

As Damiel in Der Himmel über Berlin (Wings of Desire).

As a diamond dealer in The Counselor.

As the Governor in Age of Uprising: The Legend of Michael Kohlhaas and he's speaking French.

As Professor Bruckner with Laurence Olivier in The Boys from Brazil. 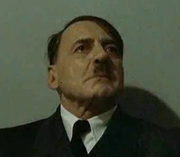 Ganz as Horst Herold in The Baader Meinhof Complex.

Ditto, with Ferch as Herold's assistant.
Add a photo to this gallery

Retrieved from "https://hitlerparody.fandom.com/wiki/Bruno_Ganz?oldid=84891"
Community content is available under CC-BY-SA unless otherwise noted.