Blondi stayed with Hitler even after his move into the Führerbunker located underneath the garden of the Reich Chancellery on January 16, 1945. In March or in early April (likely 4 April) 1945, she had a litter of five puppies with Gerdy Troost's German Shepherd, Harras. Hitler named one of the puppies "Wolf", his favorite nickname and the meaning of his own first name, Adolf (Noble wolf) and he began to train her. One of Blondi's puppies was reserved for Eva Braun's sister Gretl, and Eva sent Gretl a letter containing a photo of Blondi and three of her puppies, Gretl's being indicated with an arrow.

Hitler was reportedly very fond of Blondi, keeping her by his side and allowing her to sleep in his bedroom in the bunker. This affection was not shared by Eva Braun, Hitler's mistress (and later his wife), who preferred her two Scottish Terrier dogs named Negus and Stasi (or Katuschka). According to Hitler's secretary Traudl Junge, Eva hated Blondi and was known to kick her under the dining table. In May 1942 Hitler bought another young German Shepherd "from a minor official in the post office in Ingolstadt" to keep Blondi company. He called her Bella.

Blondi played a role in Nazi propaganda, of which portraying Hitler as an animal lover was an important aspect. Dogs like Blondi were coveted as "germanischer Urhund", being close to the wolf, and grew very fashionable during the Third Reich.

She was killed when Hitler ordered Dr. Werner Haase to test the efficiency of some cyanide capsules on his dog Blondi, as there had been cases where cyanide tablets were sabotaged and therefore not deadly. However, Hitler's batch was good and the dog died as a result. Hitler became completely inconsolable.

When Hitler realised that finding Fegelein was a task none of his Bunker mates could accomplish, he tried to give the responsibility to the dog but to no avail.

On another occasion, Fegelein kidnapped Blondi. She was eventually found, but only after Hitler's generals had attempted a search and brought the 1970s rock band coincidentially named Blondie, much to Hitler's frustration and causing him to throw the Pencil of Doom at the soldiers bringing her.

When Dolfy had Fegelein bump off Dr. Skeletor, he gave him as food to Blondi.[citation needed]

In another parody, after asking how to fry an egg, Gunsche ran over her by accident.

Blondi appeared in some of Gachaganger's parodies as a blond-haired, blue-eyed dog girl, usually just sitting near Hitler and having no role. She first appeared in Gachaganger's birthday video, then in a birthday greeting for TB76 Returns', and in The Wonder Child, where she she says that she smelled something suspicious about Fegelein, with Hitler telling her it must be the smoke. She also appeared near Astro Boy's lifeless body and when Astro says goodbye to Hitler and company. She also appeared in the third part of April Fool's Day SNAFU when Hitler is talking to Dönitz and in Gachaganger's new intro. 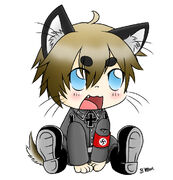 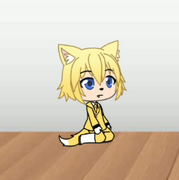 Ditto, but badass-ish
Add a photo to this gallery

Creatures of the Parody Universe

Retrieved from "https://hitlerparody.fandom.com/wiki/Blondi?oldid=85831"
Community content is available under CC-BY-SA unless otherwise noted.