Bashar al-Assad is the current president of the Syrian Arab Republic. He became president after the death of his father Hafez al-Assad in 2000. Al-Assad was elected in 2000 and 2007, unopposed each time.

Joining anti-government demonstrations in the context of the Arab spring, protests in Syria started on 26 January 2011.

By the end of March 2014, it was reported that over 150.000 people perished during the conflict. 69.727 killed by government forces and its allies, against 75.649 by the opposition and its supporters.

Bashar al-Assad does not personally appear in the movie Der Untergang, being born long after the events depicted in the movie. He does, however, have a superweapon capable of matching up with Dolfy's Pencil of Doom. It's called the Finger Twirl of Carnage. There are rumors that this superweapon has a larger cousin, the so-called Hand Wave of Disaster, but this has been unconfirmed yet.

Al-Assad may appear in an upcoming Downfall parody by Godfrey Raphael, Hitler Vs. Red Skull. He has been used briefly in several parodies since, such as in DictatorAntics' collaboration announcement video, in which Benad361 (represented by Tukhachevsky) becomes irritated by the fact that Assad is one of his bodyguards in the meeting room (ironic due to the fact that he has been very strongly anti-Assad for quite some time, and despises dictators of his sort).

It appears that Mr. Assad released his own version of Gangnam Style on the 12th November 2012.

He then represented Syria at the UN, during Episode 4of  DictatorAntics' Antic Menace series, reporting that antics were occuring in Syria. Later, in the fight over the antic dust, his jaw is broken by Romanian dictator Ion Antonescu.

In turn, he appeared in Episode 5 of Benad361's Rosen Wars: Revenge of the Plamz series, as an admiral in Rosen's Plamperial Navy. His fleet is sent to attack Planet Fegelein (the new FPUA base), but is destroyed by Admiral Traudl Junge in a hard-fought battle. Despite his command ship being destroyed, he manages to survive and cause a large chunk of his destroyed ship to ram into Admiral Junge's command ship, killing her (and eventually everyone on board, when the ship explodes).

The Hand Wave of Disaster?

Bashar al-Assad seems to be waving his hand more than usual this time. Is he using them against the Syrian demonstrators?

Look at him waving his hand. Is he thinking of the protesters while doing this? 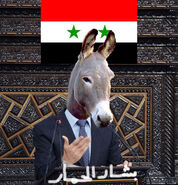 al Assad's jaw is broken by Marshal Antonescu.
Add a photo to this gallery
Retrieved from "https://hitlerparody.fandom.com/wiki/Bashar_al-Assad?oldid=55993"
Community content is available under CC-BY-SA unless otherwise noted.