16 October 1946 (aged 56) Parody Jodl: Alive and well (Sometimes dead after Hitler being pissed off at him)

Alfred Jodl was born out of wedlock as Alfred Josef Ferdinand Baumgärtler in Würzburg, Germany, the son of Officer Alfred Jodl and Therese Baumgärtler, assuming the surname Jodl upon his parents' marriage in 1899. He was educated at Cadet School in Munich, from which he graduated in 1910. General Ferdinand Jodl was his younger brother. The philosopher and psychologist Friedrich Jodl at the University of Vienna was his uncle.

After schooling, Jodl joined the army as an artillery officer. During World War I, he served as a battery officer on the Western Front from 1914–1916, twice being wounded.

Jodl's appointment as a major in the operations branch of the Truppenamt in the Army High Command in the last days of the Weimar Republic put him under command of General Ludwig Beck, who recognized Jodl as "a man with a future", although it was only on September 1939 that Jodl met with Adolf Hitler for the first time.

During the Battle of Britain, Jodl was optimistic of Britain's demise and on 30 June 1940 wrote "The final German victory over England is now only a question of time."

He was injured during the 20 July plot of 1944 against Hitler. Because of this, Jodl was awarded the special wounded badge alongside several other leading Nazi figures. He was also rather vocal about his suspicions that others had not endured wounds as strong as his own, often downplaying the effects of the plot on others.

At the end of World War II in Europe, Jodl signed the instruments of unconditional surrender on 7 May 1945 in Reims as the representative of Karl Dönitz.

At the Nuremberg Trials he was tried, convicted, sentenced to death and hanged as a war criminal.

In Der Untergang, Alfred Jodl is first shown in the "Hitler Plans Scene". After Keitel exhorts Hitler to retreat the 9th army, Jodl interjects Hitler and tells him that "then the 9th army is lost". Hitler then retorts with a plan to counterattack and save the 9th army. Alfred Jodl thought the plan was impractical, so after Hitler answers to Krebs' queries, he fervently objects to Hitler having the 12th army move in to reinforce the 9th, making Hitler extremely angry and starting an argument with Jodl. In the end, he was silenced when Hitler remarked that he was not obeying orders.

Although Jodl had great dissatisfaction for Hitler, he considers himself an honorable soldier and refuses to leave, betray or ignore Hitler's orders (unlike Fegelein and Himmler). In "The Generals Discuss Hitler Scene", he complained about Hitler's "Insanity" but rebuked Fegelein's suggestion to ignore Hitler's orders. Jodl only played a minor role in the subsequent scenes he appeared in, where he was mostly silent.

He was also the least fanatic of the 4 generals, Keitel, Krebs, Burgdorf and himself. When the bunker was about to be evacuated he was supposedly still around, as he was last seen shaking Hitler's hand.

Though he is considered a main character, his appearances are fewer than that of Fegelein's.

In the Downfall universe, he was perhaps most notable for his objections, which pisses off Hitler. Hitler fires Jodl at one point, because he was getting sick and tired of his objections. However, because of strikes causing problems in the bunker, Hitler plans to rehire him. During the re-hirement, again Jodl objects to one of Hitlers comments. He does get rehired though. After some time, instead of firing Jodl, Hitler plans to replace him.

Jodl gets replaced by Mohnke, who does not object to Hitler's global domination plan. Meanwhile Jodl knows this plan will fail and needs to stop it. Many think the plan will end in vain, but Hitler does not want to cancel his plan which would mean he has to rehire Jodl. Eventually Mohnke feels the same way and cancels the plan himself, leading to Jodl's re-hirement.

In some rare cases, Jodl actually doesn't object Hitler's plans. In these cases however, either someone else objects it or Jodl doesn't object, but Hitler would wanted it. Jodl was once hired to replace Günsche when he quit as informer . However, since Jodl did the job a bit too well, he was abruptly fired from the position.

Apart from the objections, he also became the staple of ridicule among the bunker occupants, as most of his fellow comrades, and even Hitler himself, poke fun at his bald head (such as calling him a bald virgin) and, like Göring, his fat body (The real life Alfred Jodl was actually quite thin and was bald only on the top of his head). One of the parodies explained that Jodl once had normal hair like everybody, until Fegelein burned it off during an antic.

Also, the real Hitler calls Jodl a bald freak by not letting him object to his job.

Some of SSHimmlerHeinrich's parodies consists that Jodl was a fan of Justin Bieber, along with his unnamed daughter, who was not mentioned.

He wields a formidable superweapon, the Skull Brightness Doomsday.

In some parodies, Jodl has the sensitivity of a child, often resulting in crying to the point where it has the same power as a nuclear explosion.

He also once was replaced by Krebs as an objecter whilst he became the map pervert, only to fail ultimately, causing the bunker to be an objecto-rama.

Jodl also owns his own chain of restaurants named Jodl's Burger, where he will object to serve any food if you don't order in less than 18 seconds.

In Vincentalot-XD Elite's Jodl Wright-Reich Attorney series, he became an attorney and must prove Hitler's innocence when he was accused of kidnapping Burgdorf's Boozing Table, in which he succeeded.

A recurring gag in TheSilverUniverse's parodies involves that of Jodl's head making a random cameo appearance in most of his videos. This was further parodied in the mockumentary The Jodl Head[1], which humorously documented Jodl head sightings in some of TSU's parodies.

After the said mockumentary was published, the Jodl head, previously a feature unique in TSU's parodies, became popular and began to proliferate in others' parodies. It has even be coded into this very wiki, spawning on rare occasions. A second mockumentary has also been released, featuring more background information and an exclusive interview with the Head itself.

Recently, this has become a staple in HRP's latest parodies where Jodl, after being annihilated by Hitler, haunts him via his ghost.

A smaller portrait of Jodl.

Jodl and the generals talk about Hitler.

In fact, his bald head is so shiny it could blind the Soviets.

Jodl played Hans Krebs in Die letzte Schlacht. It's unknown if Krebs objected to this.

War and Remembrance Jodl, on the phone. And he has hair!

Is Paris Burning? Jodl behind Hitler. 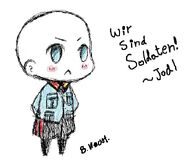 Chibi Jodl drawn in MS Paint (with a Wacom Bamboo of course!)

Jodl with his buddy Keitel. 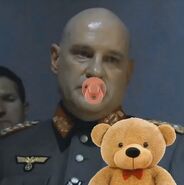 Baby Jodl. It is rumored that his first word was objection.

The infamous Jodl twins, now with twice the objections. Also effective as anon deterrent in the Unterganger's Chat.

Jodl objects even in games.

A recorded image of the Jodl heads that haunt this very wiki.

Sprite for the Jodl head.

Jodl is a new cast for the new Walking Reich season

Another photo of Alfred Jodl. His bald head is much more visible.

Hitler points at a map and Jodl looks.

Jodl shows something to Hitler on a map, while Fegelein sneaks from behind.