Alexandra Maria Lara (born Alexandra Maria Plătăreanu; 12 November 1978) is a Romanian-born German actress. She performs predominantly in leading roles in a variety of historical and crime films. Lara is best known for her roles in Control (2007), Youth Without Youth (2007), Nackt (2002), Downfall (2004), About the Looking for and the Finding of Love (2005), and The Reader (2008).

Born in Bucharest, Lara is the only child of Valentin Plătăreanu, a Bucharest actor, and his wife, Doina, a homemaker. When she was four (in 1983) her family decided to flee to West Germany to escape Nicolae Ceauşescu's regime in Communist Romania. Although the family had originally planned to emigrate to Canada, they settled down in Freiburg im Breisgau, Baden-Württemberg, before eventually moving to Berlin. After graduating at the Französisches Gymnasium Berlin in 1997, Lara went on studying acting under the management of her father, co-founder of the Theaterwerkstatt Charlottenburg, until 2000.

By age sixteen she was already playing lead roles in various television dramas. Since then her career has developed and she has become a respected film actress. Her most famous role to date, which has resulted in international recognition, is as Traudl Junge, Adolf Hitler's secretary, in the Oscar-nominated 2004 film Downfall (Der Untergang). Due to her convincing performance in Der Untergang, Francis Ford Coppola wrote her a letter and gave her a leading role in Youth Without Youth(2007). She played a lead role in Greek director Theo Angelopoulos's 2008 film The Dust of Time, opposite Irène Jacob and Bruno Ganz. Speaking French fluently, she also appeared in several French productions, including Napoléon andl L'Affaire Farewell. More recently, she appeared in The Reader and Der Baader Meinhof Komplex which were both nominated for the 81st Academy Awards (best picture and best foreign language film, respectively). 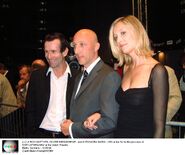 With Oliver Hirschbiegel and Ulrich Matthes at the film premiere.

As Anna Amalia in Trenck - Zwei Herzen gegen die Krone, together with August Zirner, who plays the role of Frederick II.

And she can also rant. Hitler's idol is on the receiving end of it, unfortunately.
Add a photo to this gallery

Retrieved from "https://hitlerparody.fandom.com/wiki/Alexandra_Maria_Lara?oldid=67739"
Community content is available under CC-BY-SA unless otherwise noted.