“Albert Speer, antic dealer. The Billy Mays of the antic tools. Buy now or regret lost chances later.”
―Albert Speer doing his dirty work
“No power, no gas, no drinking water, no coal, no transportation. All the railways, canals, docks, locks, ships and locomotives – destroying all that would hurl back our country into the Middle Ages!”
―Speer hinting to Hitler maybe they should give up the war. [src]

Berthold Konrad Hermann Albert Speer ([IPA: albɛɐt ʃpeːɐ]; 19 March 1905 – 1 September 1981) was an architect and a Nazi politician, who served as Germany's minister of armaments from 1942 to 1945. Speer claimed in his memoirs that he visited Adolf Hitler in the bunker on 22 April 1945, shortly before Berlin was overrun by the Soviets, and asked him to cancel the edict to destroy all German civilian infrastructure, though the veracity of the tale was doubted by historians. Speer left the city the next day, and was later arrested and put on trial in Nürnberg. He was convicted of crimes against humanity and served 20 years in prison. He was released in 1966 and lived until 1981 when he suffered a stroke.

Speer is portrayed by Heino Ferch in Downfall.

Speer has a minor role in the movie. He visits Hitler in the Bunker on the latter's birthday. As in real life, he is one of the Führer's best friends and the two have a little chat. Speer is ordered to induce a scorched earth policy so that the Soviets wouldn't claim anything useful. However, he does not do so. When he tells Hitler about this, Hitler is visibly heartbroken and speechless, and breaks a pencil. Speer leaves the bunker. He's later mentioned in the Hitler Eats scene.

“Do you guys need some equipment? I just shipped in some brand new ones.”
―Speer the antic dealer to Himmler and Fegelein

The Downfall Speer drops by on Heinrich Himmler and Hermann Fegelein in the bunker's parking lot every once in a while, selling tools for antics and the like, thus giving him the impression of being the cool boy of the Bunker. He was also known to have worked as a courier for Edward Merriman, such as when he delivered a shipment of missiles to Himmler and Fegelein.

Speer is a highly skilled engineer and inventor. He has created such wonders as a robotic office assistant, called the Fuhrer-Aid 2000[1], and a touchscreen controller[2] for Hitler to play video games on.

Speer also owns a dollar store: The Dollar Reich[3], where Hitler worked at for a while after the war was lost. Hitler slacked off a lot, and did various faults such as shouting at Günsche and waking up at 11:00, being late. Speer later fired Hitler due to all of these faults. In Hitler's Shining, he holds a managerial position in The Fegelcist Hotel's administration, interviewing Dolfy who applied for a job.

Hitler generally trusts Speer more than the other occupants of the bunker, as shown when Hitler asks Speer to guard his model of Berlin[4].

Speer has an ice-cold personality towards Goebbels; as the latter entered the radio room crying because his teddy bear was missing, he only find the serious-looking architect who simply replied with:

“Fuck off. You're a grown man damn it. We talked about this before.”
―Speer to Goebbels when the latter lost his teddy bear

Speer also possesses the special ability to detect and rate boobs with his Eye of Boob Detection. Though not a superweapon, it had helped Hitler in a few circumstances, such as distinguishing real Traudl from someone wearing a costume. His boob-detecting eye might have some limitations, as he then proceeds in constructing the Tittyvision, a device with a boob-shaped dome, giving anyone the ability to detect boobs.

In some Czech parodies made by GameballCZ, Speer is called Shrek by Hitler.

His counterpart in the Mirror Parody Universe, Reeps Trebla, is also an antic dealer, although he sells them to Reltih, the antic-doer in that alternate universe. His U-Boat Parody counterpart is the 1WO, who works as an antic dealer for the crew of U-96.

A list of other portrayals of Albert Speer can be found in his character page in the Internet Movie Database.

Ditto, on the stairs.

Speer tries to convince Hitler into buying his products.

Speer und er Speer along with his Hitler. 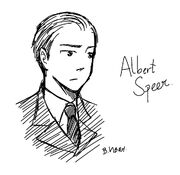 Speer, YOU'RE NOT BRUCE WILLIS!!!

YIPPEE-KI-YAY, Speer.
Add a photo to this gallery

Retrieved from "https://hitlerparody.fandom.com/wiki/Albert_Speer?oldid=81053"
Community content is available under CC-BY-SA unless otherwise noted.