Dr. Aisha (Or Ayesha) al-Gaddafi is a former UN goodwill ambassador, a lawyer, and a mediator in the 2011 Libyan civil war.

In Benad361's recent parody Hitler versus the Gaddafi's: Part One (currently unavailable), Ayesha is shown as an excellent ranter, and brags she is "the beauty of Traudl" and the ranting power of Hitler put together. It could be argued she is the answer to Traudl for the Gaddafi parodies. 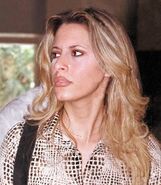 Aisha without her veil 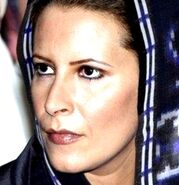 Aisha using her Stare of Silence. The photographer couldn't speak for an entire year after that.

Aisha goes mad with the untold powers of the Stare of Silence.
Add a photo to this gallery

This article is a stub, seriously. Go and press the "Edit" button so you can help expanding it. If you don't do it you will become a victim of a Fegel-antic!
Retrieved from "https://hitlerparody.fandom.com/wiki/Aisha_al-Gaddafi?oldid=56013"
Community content is available under CC-BY-SA unless otherwise noted.