For the Hitler in Downfall, see Adolf Hitler.

This version of Hitler is based on the real historical person. On multiple occasions, the characters refer to him as the Other Hitler. A notable moment when this happens, is when Hitler is informed he lost the war 70 years ago. He denies this fact and tells his generals it was probably the other Hitler who lost the Second World War.

Whenever this Hitler interacts with the Downfall Hitler, he almost always accuses him for being an imitator, while proclaiming to be the real Hitler himself, much to the latter's frustration. He also appears to be more bombastic compared to other Hitlers, as he always talks like he is giving a dramatic speech, even in one on one conversations. This can be attributed to the fact his on screen appearances are realized using footage of his real life speeches.

In the War of The Hitlers, this Hitler is the most powerful and feared Hitler of them all, as many other Hitlers fall before his might. This is because he made an alliance with Na'kuhl aliens, who supply him with futuristic weapons. In this video series, he is also referred to as Adolf Hitler, as opposed to the Downfall Hitler, who is only referred to by his surname Hitler. Adolf Hitler was finally defeated by a rare alliance between Downfall Hitler and Fegelein. The latter pretended to defect to Adolf Hitler's forces, but instead stole some of the alien technology, using it to upgrade the Pencil of Doom. This was used by Downfall Hitler to utterly destroy Adolf Hitler's base, with him still in it.

In HRP's series, Back to the Reich, Downfall Hitler, in his ever growing frustration with Fegelein, made up a plan to travel back in time in order to kill the antic master in the past. Hitler thinks that Fegelein's pranks are the only reason why his plans for world conquest have failed. By removing him from the timeline, he hopes he will create a new timeline in which he has successfully taken over the world. Unfortunately for Hitler, his meddling in the past results in a new timeline, in which the real Adolf Hitler won the War of The Hitlers.

The real Adolf Hitler also appears in TheSilverUniverse's Hitler's Secret Meeting. In this parody, Downfall Hitler invited several other Hitlers to ask them for advice in dealing with his Fegelein problem. After the Inglourious Basterds Hitler boasted about him being the best Hitler, the real Hitler corrected him, by saying he is the best, as he is the real one. He also advices Downfall Hitler to just give up his fight against Fegelein, as he considered it a lost war already.

A Photo of Real Hitler.

Hitler awarding Hitler Youth boys during the battle of Berlin. (This still is taken from what is known to be Hitler's final public appearance). 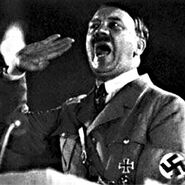 Hitler doing what he does best: Giving a dramatic speech.

Real Hitler becomes a Chancellor in 1933.

Real Hitler sitting in his favorite office in Downfall Parody.

Retrieved from "https://hitlerparody.fandom.com/wiki/Adolf_Hitler_(Real_life)?oldid=82335"
Community content is available under CC-BY-SA unless otherwise noted.