Actor Hitler parodies are parodies that make fun of, or mix footage from other films, clips, etc., starring actors from Downfall. In other words, the actors are assumed to be playing their Downfall role when they are actually in other films. The other end of the spectrum is different actors depicting the same character, but this is less popular for characters other than Hitler.

There are a lot of actor parodies that involved Thomas Kretschmann, who portrayed Fegelein in Downfall.

One example of the parodies is Fegelein's Cologne Commercial, which depicts Hitler watching a Hugo Boss advert starring Kretschmann, much to Hitler's dismay. This parody was made thrice; one by KakashiBallZ, again[1] by Hitler Rants Parodies, and later by johnnomonster (aka Trapped Antics).

Joster285 made one actor parody using footage from the laughable promo teaser of Dario Argento's Dracula 3D starring Thomas Kretschmann in the title role. In the parody, Kretschmann Dracula is portrayed as Fegelein's brother from Transylvania, named Count Fegelein, whom has a giant killer preying mantis as a pet. Nervous of having a Vampire Fegelein in the bunker, Hitler decides to pull an antic of his own to calm himself down. He takes Count Fegelein's condoms and replaces them with garlic-skinned ones causing a burning sensation. Finding this out, Count Fegelein sends his giant killer preying mantis after Hitler.

In Have No Fear: The Life of Pope John Paul II, Kretschmann played the titular Pope John Paul II. Also of note is Bruno Ganz, portrayer of Hitler in Downfall, playing a cardinal in this film. Several parodies have been made relating the antic master to the Holy See, such as in vzorkic's Die Inception, and in Der Disneygang, more specifically the scene where Kretschmann's character emerged from the Vatican balcony, to which Soalric depicted as Fegelein being proclaimed as an honorary Disney character. The scene with the characters of Ganz and Kretschmann together was used by ReschJodSchin94 in Hitler gets informed he elected Fegelein the new pope.

Kretschmann also starred in 2005's King Kong as Captain Engelhorn, who took Carl Denham and the others to the Skull Island, and later played a role in saving them. Not many parodies were made from this. Subtitlecomedy is actively modding the NPC model of Engelhorn (Fegelhorn?) from the franchise's game, porting it into various games (notably GTA IV).

In the July 20 plot film Valkyrie, Kretschmann plays the role of Otto Ernst Remer; it is because of this fact that the film has been used in a few parodies, most notably Fegelein Teams Up With Claus von Stauffenberg by KakashiBallZ.

In The Sinking of Laconia, Kretschmann plays the main role of Admiral Karl Dönitz. Like King Kong, Kretschmann is assumed to be Fegelein in parodies that used the scenes from this movie. In particular, DictatorAntics, Benad361, Joster285, JJ All-star, and F-A Alexander made use of the newly available scenes. It also gave birth to a new antic master Werner Hartenstein who is under apprenticeship of Fegelein.

Kretschmann would also appear in a similarly-titled and more recent film from 2013, playing a different character named Peter Kahn. F-A Alexander has used footage and sound clips of Kretschmann from the film in his parodies, such as the aforementioned Antics in the Bunker parody.

Another example is Hitler watches the end of Tomorrow Never Dies, depicting the death of super villain Stamper, who is portrayed by Götz Otto, the same man that portrayed Günsche in Downfall. This excites Hitler, as he hates Günsche for his incompetence and presumed alliance with Fegelein, only to discover that the whole scene itself was faked by Fegelein and that Günsche is still alive.

Iron Sky eclipsed all of this when it came out in April 2012. It depicted Götz Otto as the aspiring and cunning Klaus Adler, who successfully plotted to become the new Führer of the Fourth Reich. Hitler Rants Parodies quickly played a pivotal role in tying this film and Downfall together – Günsche-Adler played a central role in his parody timeline, most notably in The Final Conflict. DictatorAntics is also known for using scenes from Iron Sky.

Other actors in Downfall

On February 2012, a parody titled Mohnke and the Russian Patient was made, where André Hennicke, who plays the role of Mohnke in Downfall plays the role of Professor Eugen Bleuler treating a particular psychologically unstable woman in the film A Dangerous Method.

PiretBCN has made a few actor parodies which mostly related to Contemporary Germany and true to era. Mostly from German TV series Tatort, characters played by the former actors portraying Burgdorf, Jodl, Himmler and Magda found themselves being their Downfall counterpart, time-traveling from the WWII era. Jodl escapes the endless rants of the Führerbunker and finally found his love in Contemporary Germany. Burgdorf escapes a murder case, only to convicted using modern forensics.

There are also plenty of parodies that use footage from the films Die letze Schlacht and White Tiger; Christian Redl, Jodl's actor, appeared in both films playing two different characters who also appeared in Downfall; Krebs and Keitel, respectively.

HitchcockJohn, in his parody Hitler Plans to Kill Captain Willenbrock, took advantage of the fact that Jürgen Prochnow, who played Heinrich Lehmann-Willenbrock in Das Boot starred in a less successful thriller titled Kill Cruise in which his character is harpooned through the neck by Elizabeth Hurley. He toyed with the idea of a sequel in which Hitler would attempt to arrest Captain Willenbrock, using footage of Prochnow from Air Force One, but the idea was ultimately abandoned. However, he did eventually make a parody which used footage of Prochnow from In The Mouth of Madness, specifically a strange sequence where Prochnow's character Sutter Kane, a horror writer who has managed to blur the lines between fiction and reality, literally tears himself apart and in the process creates a hole through which Lovecraftian monsters are released.[2] The parody involved Willenbrock opening a hole in the space-time continuum as "the ultimate antic".

Subtitlecomedy also made use of footage from Shailene Woodley's other films such as The Descendants and CSI:NY, the former of which was a minute-long footage of her character from Descendants ranting and crying at the issues with her mother; the parody involved that of Merriman ranting at Constantin Film, using the said clip from the film. Another case was with Madison Davenport's character in Shameless being depicted as Ruthie Smithens in a parody about the latter's retirement from American Girl.[3] Plans have been made in using footage from Shailene's recent films, as posted on the Facebook groups, although this is yet to come into fruition.

Krebs is ap-pointed as President!

Herr Reichsminister of Propaganda somehow converted to Judaism, and is thrown into a concentration camp as a result..

Ein Starkes Team - Burgy: We can't fit another one in the car, Misch! You can get into the bonnet if you want.
Misch: The bonnet?

Watch where you point that gun, Traudl! It could kill someone!

Traudl is now a ranter, too.

Don't act so surprised, Bormann; we know that's you!

I love Krebs, vodka and kids.

After he died, Dolfy became an angel and loses his moustache. He gets a pony tail though.

"Dammit Weidling, I told you not to surrender Berlin!"

"Please! Give me awards."

It's my turn to object your plan, My Führer.

Get out of my house, Dolfy!

I'm going to kill you.

He has returned to Stalingrad while he smokes. Enjoy the view.

After he retired from being the Führer and he could no longer rant against Fegelein, he apparently became involved in diamond business, especially with a familiar German customer.

Fritzsche as the dentist who's treating Bill's teeth. There's another reason why he escaped the Führerbunker.

"I'm sorry, Dolfy, for all the antics I've done to you. Please don't kill me."

Misch tries to prevent Fegelein from commiting an antic on him. "A single antic on me, and she gets it!"

"Sorry, darling. I'm married to someone else who loves maps."

Dolfy and Ezra Lieberman discussing about Josef Mengele's plan to clone him.

King Koller I, King of Neinville

King Koller I again, but with his servant, Prince Dialup

Jodl, cosplaying as Keitel.
Add a photo to this gallery

Tukhachevsky: still a military man, still warlike, yet more dapper than usual, and with knowledge of a deadly mind-control weapon.

Captain Heinrich Lehmann-Willenbrock tearing himself into the fabric of space and time. 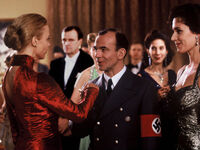 Not only that I'm the Führer, but I'm also my own Minister of Propaganda.

There's no doubt that Kittredge had a liking for toting twelve-gauge shotguns.

Claus von Stauffenberg, now with a new pair of eyes and working as a hitman.

Captain Heinrich Lehmann-Willenbrock has landed on another planet. 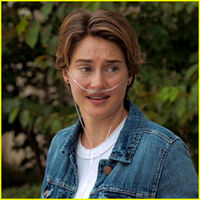 What happened to you, Felicity?

She's lonely and depressed after years of killing zombies and doing antics.

Mallory has joined the Wehrmacht, but not without his explosive tipped bullets.

What is wrong with you Kit?? I thought you hate being flouncy!

Edward Marriman as a young antic master.
Add a photo to this gallery